The Selkirk Peace and Justice Group and The Selkirk Film Club worked together to show this film to raise awareness of the need to act now to reverse climate change. We cannot say we are unaware of changes to the worlds climate. As 28 of us sat watching the film the Islands in the South Pacific were being ravaged by the biggest Cyclone in climate history. 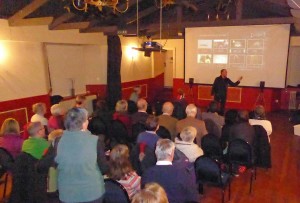 ‘The Age of Stupid’ was first released in 2008 and identifies 2015 as the year after which reversal of our impact on the climate starts to become irreversible! Watching the film again one could be depressed to note that so little progress has been made in the intervening years. We just fail to understand that we need to act now in order to prevent catastrophic effects for future generations. Politicians need to know that the public are concerned and do want them to make the big decisions to bring about the big changes needed in our use of the world’s resources.

After the film we were encouraged to write to our politicians to empower them to act. Postcards were available for completion to be sent on our behalf to The First Minister and our local MPs.

If we want them to be brave we need to be brave too. It is a case of ’I will.’ ‘If you will’ and encourage others to join in and say ‘So will I’

Together we can make the changes for the climate future of the world.

Postcards are still available at SPC or from Jane Peers.